Caltrans publishes a quarterly performance report they call Mile Marker. For the June 2015 edition, the California transportation agency debuted new performance measures, including data on use of active transportation, on-time intercity rail trips, as well as cyclist and pedestrian fatality rates. They also highlighted a the successful implementation of a road diet project for downtown Redding, California. The cover features people biking and walking across the Sacramento River on the Sundial Bridge in Redding. 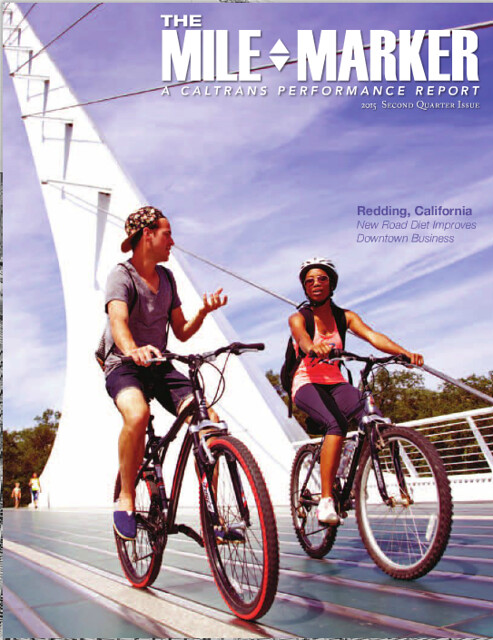 Caltrans sets targets for itself to reduce auto driver and work-zone worker fatalities, improve road pavement and bridge quality, and improve the public’s perception of the agency. These goals and Caltrans’ performance are published in this Mile Marker publication.

For June, Caltrans now collects and publishes numbers for bicycle, pedestrian, and transit rider fatalities; use of non-auto transportation; and on-time performance of intercity rail service. Caltrans Director Malcolm Dougherty (who, incidentally, can be seen biking to work in Sacramento) writes that tracking these numbers reflects “a strong indication of our expanded focus on transportation alternatives, active transportation and a fully integrated system.”

The introduction to the June issue emphasizes Caltrans shift in direction.

It’s a new day at Caltrans, with new priorities, new goals, and new commitments. To refer to Caltrans merely as a highway department would be to miss the point of a revolutionary shift in focus and values. Safety, of course, remains Caltrans’ top priority. But now it is linked with health–a connection that is rare among transportation departments.

Making it easier to get around without a motorized vehicle encourages healthy lifestyles. So Caltrans has placed new priority on active transportation and on safe routes for bicyclists and pedestrians.

Reducing transportation-related pollution also fosters healthier lives, while helping California maintain its leadership role in the battle against global warming. So Caltrans has increased its focus on transit systems and sustainable links between all modes of transportation. 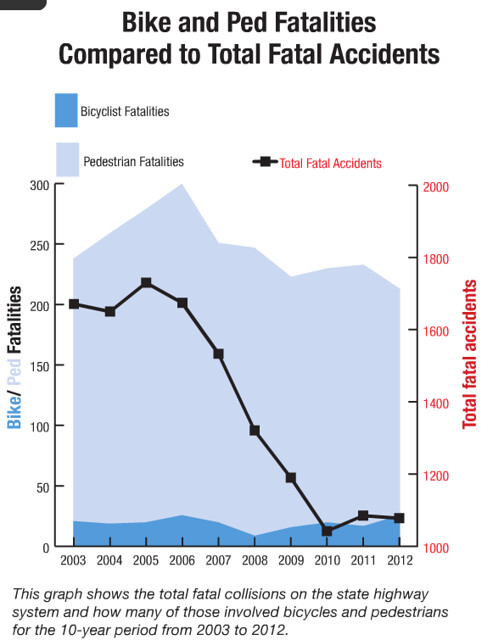 To work towards this goal of improving non-SOV transportation, Caltrans now collects numbers related to these modes of transport. They acknowledge the lack of good statistics and are working to eventually improve the data. In the meantime, they’ve found that while motorist fatalities have dropped significantly on state highways over the past decade, the same cannot be said of cyclist and pedestrian fatalites. 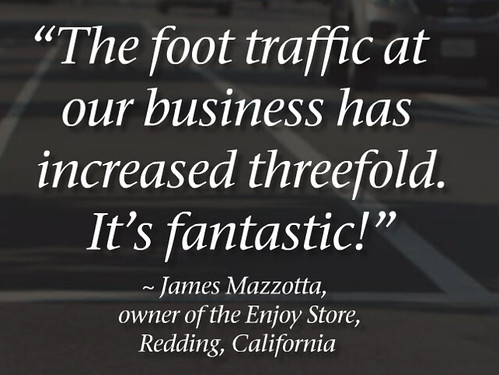 Redding is a city of 90,000 people in Shasta County with an overwhelmingly conservative electorate. Transportation planners in the great state of Northern California have historically designed only for faster roads for more cars, which means a sucky built environment for downtown Redding.

Caltrans began planning for what they called the “Downtown Redding Thin Blanket Overlay Pavement Resurfacing Project” for State Route 237, which is otherwise known as California Street through downtown Redding.

On Bike to Work Day, Caltrans District 2 Director John Bulinksi and city of Redmond Public Works Director Brian Crane participated in a group ride and heard from residents about the crazy concept of a road diet for California Street. Caltrans engineers determined they could easily reduce California Street from three lanes down to two and use the leftover space for buffered bike lanes. In spite of opposition from downtown businesses that thought they depended on auto traffic to survive, Caltrans proceeded to “right size” California Street.

The result has been a much more pleasant environment for all users of the public space, and more jingle in the pocket for downtown businesses. James Mazzotta, owner of the Enjoy Store, a fine gifts and gourmet food shop in Redding, said, “I was initially concerned and not happy about the idea to go from three lanes to two on California Street. But, now I love it!” he said. “The foot traffic at our business has increased threefold. It’s fantastic!”

You can find the new Mile Marker at this page. To avoid the fancy page-flipping interface that tries to retain a hardcopy book metaphore on an electronic display, try the handy PDF downloads located at the bottom of that page.