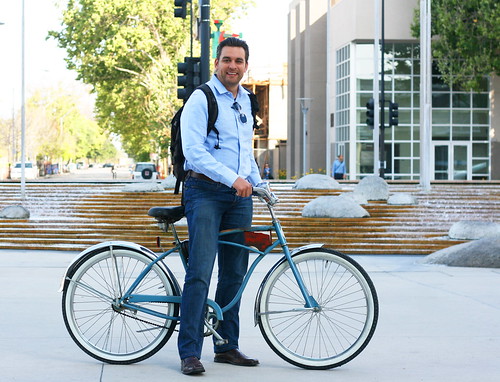 Peralez lives just 2.5 miles from City Hall. He’s discovered he can commute to work at a casual pace in under 15 minutes. He can cover most of District 3 with his bike within 20 minutes or so. In his San Jose Mercury News op-ed piece published yesterday, he writes, “Parking my car has been a blessing in so many ways. Primarily, I have surpassed the most difficult hurdle in simply just knowing I don’t need a car to get around.”

He encourages others to try it, reminding them that today is Bike to Work Day in the Bay Area.

I’m glad to see several politicians bike to work today, but I’m especially glad to see people like Peralez go beyond just this one special day. I endorsed his opponent last year, but I am super happy to see Raul Peralez get on board to try this biking thing.

Read how the local Bike Lobby strong-armed Mr Peralez to give up his car for month, and how even his executive assistant Norma (whom I’ve met, she’s a lovely lady) rides public transportation to work all the way from Hollister! in his opinion piece: Raul Peralez: Parking my car has never been so fun.

Have a happy bike-to-work day!