Colorado Governor John Hickenlooper announced his state will spend $100 million on bike facilities at this morning’s People For Bikes keynote as Interbike 2015 launched. 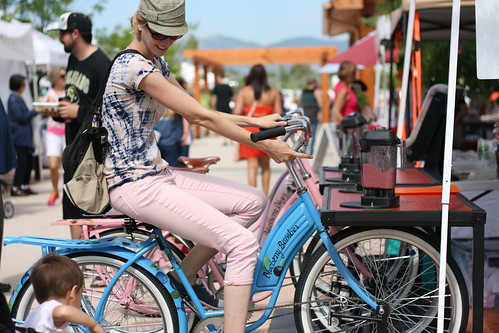 “Our goal is to make Colorado the best state for biking in the country which will help fuel our robust economic growth and tourism industry, move us toward a cleaner environment and advance our goal of being the healthiest state in the nation,” said Hickenlooper at the massive bicycle industry show in Las Vegas, Nevada.

According to People For Bikes, which sponsored the breakfast and Hickenlooper’s appearance, the four-year plan and $100 million budget will allow Colorado to put more bikes in people’s hands and make it safer to ride bikes by adding bike lanes and improving driver education.

“We want to encourage riders of all shapes, sizes and abilities by making biking as safe and accessible as possible statewide,” said Denver B-Cycle board chair Ken Gart. “With more than 5,000 miles of biking trails throughout the state, and events like Pedal The Plains and the U.S.A. Pro Challenge, Colorado is poised to take this lead.”

Hickenlooper highlighted the economic, environmental and social benefits of cycling to the bike industry audience, and explained that CDOT has been directed to incorporate Complete Streets elements into their design standards.