Richard MasonerApril 13, 20158 Comments on Do commute-only counts undercount bike use?

Does the frequent use of U.S. Census American Community Survey (ACS) data under-represent true bike use in your community? 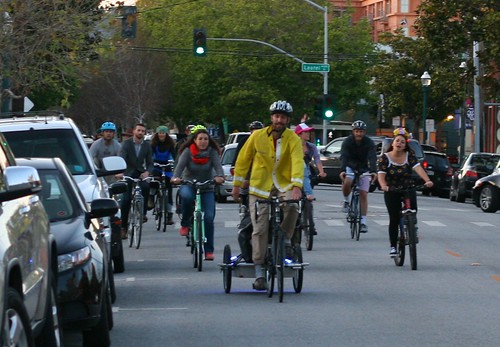 What is the ACS?

United States Census American Community Survey (ACS) data on “Means Of Transportation to Work” is frequently used to compare bike-usage across different American cities. Although a few cities do their own bike counts and there’s now even something approaching a standardized methodology, the ACS commuting data is often used because it’s convenient and available for every population center in the country. You can dig down to individual Census tracts or go up to ZIP code, city, county and state level, splitting populations by gender, ethnicities, commute time, income and other factors if you want.

This ACS data counts only work trips. It misses trips to shopping, coffee klatches, pub crawls, farmers market, school, errands, and recreation, whether you’re on a lazy meander, a full-on training ride, or doing something in between. Many people, myself included, strongly suspect the ACS data undercounts true bike usage in a community.

I was really surprised to see this data from the most recent bike count for Santa Cruz County, taken last October 16, 2014. At the city of Santa Cruz’s busiest intersection for bikes, bicycles made up only 7.1% of traffic between 4 PM and 6 PM, while cars constituted 83%. 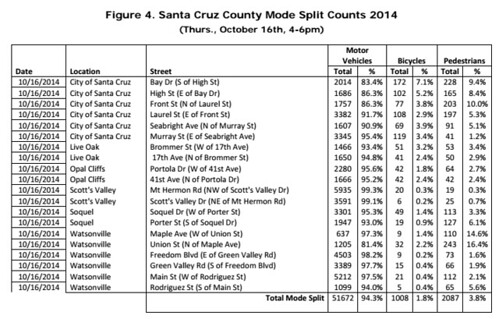 Compare against the ACS 2011-2013 3-year estimate for the city of Santa Cruz, which shows 9.9% of workers bike to work. Excluding transit, work from home and the “other” category like the county does for their mode split counts, 77% drive or ride in a car and 11.4% bike to work.

The traffic count shows 7.1% bike traffic at this intersection, while the Census commute data shows 10% of city residents commute by bike. Surveys at all other locations show significantly less bike traffic when compared against the Census data.

This county bike count data goes against my expectations and has me scratching my head. The weather was clear and mild the day of the counts, but the National Weather Service records five-hundredths of an inch of rain on the previous day. Did the light mist on the day before discourage biking? Does the evening commute time frame really miss that many people on bikes? Bay and High are both popular bike routes, but perhaps bike traffic is much more dispersed city-wide, while automobilists tend to funnel onto arterials and collectors? 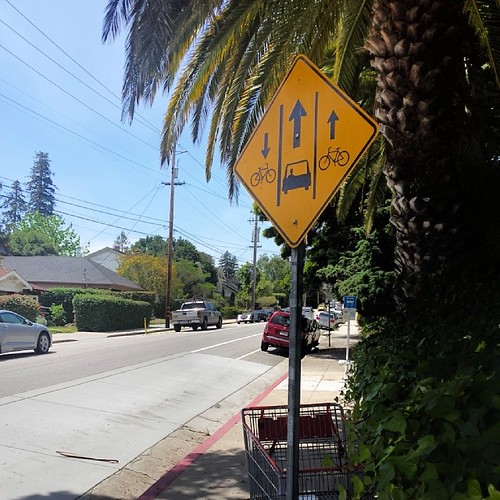 I’m curious about your thoughts on this. If you’re familiar with information from other cities that collect bike count data (e.g. Boulder, CO; Portland, OR; San Francisco, CA), I’m interested in how they compare against ACS bike commute data.