Santa Cruz Metro, which operates public transportation in Santa Cruz County, California, will vote on a proposed 42% fare increase for the Highway 17 bus later this month. This commuter express transports about 2% of those who commute “over the hill” from Santa Cruz County to Santa Clara Valley. 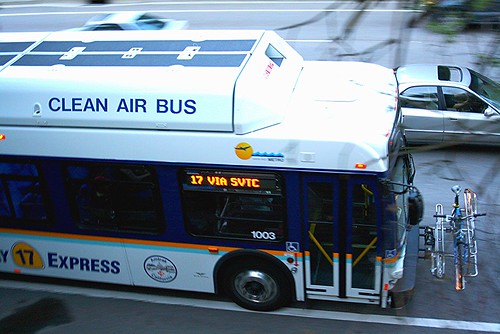 Santa Cruz Metro staff estimate a ridership loss of perhaps 10%. I think this sounds optimistic, but let’s go with this figure for the sake of argument. With 85% of drivers riding solo across the Santa Cruz Mountains, that translates into 128 more cars on California State Route 17 every morning and the same 128 cars every evening.

Caltrans District 5, which has responsibility for State Route 17 in Santa Cruz County, has a Transportation Concept document for each highway in its jurisdiction. This concept guides planning and policy for that highway. Because of “geometric restraints” on the Highway 17 corridor (e.g. challenging mountain terrain, crossing multiple geologic faults), Caltrans policy document directs the agency to “focus on transit, TDMs, and intermodal facilities to reduce demand.

Highway 17 already operates at LOS “F” during peak hours. What constitutes a “project” under CEQA rules? Does an interregional bus route fare hike qualify? If Rob Anderson can file a CEQA lawsuit against the city of San Francisco for a bicycle plan, can Joe Citizen do the same for a bus fare hike?