Richard MasonerFebruary 9, 20152 Comments on Flooded trails and a roundup

Happy Monday to my readers, both regular and irregular. These two people on bikes were among the seven cyclists I saw this morning trying to work their way across Montague Expressway where the Guadalupe River Trail remained flooded after the the rain this past weekend. Remember, you can see current trail flooding conditions for several Santa Clara Valley trails at this trail conditions web page. 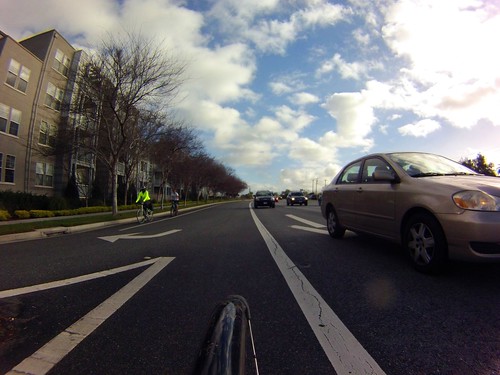 Watch for debris on our area highways and roads, too. Highway 9 in the Santa Cruz Mountains is closed near Skyline and remain so for the next day or so.

Major mudslide blocks both lanes of Hwy 9 S of Skyline in SCruz Mnts. CHP says roadway will be closed 24-to-36 hrs. pic.twitter.com/Hi8iekp0EG

You might remember the hit-and-run cyclist fatality that occurred the day after Christmas in Santa Cruz, California. 63-year-old Jose Adan Lainez was riding his bicycle to work on Soquel Avenue when a white Ford F-150 struck him from behind. 41 year old Luke Logan of Live Oak did the right thing and gave himself up to police. The Santa Cruz police investigation fascinates me:

In the weeks after the collision, investigators compiled a list of pickups in the area that matched the description of the suspected vehicle in Santa Cruz County, including Logan’s vehicle.

A fatbike alleycat in Cleveland.

Just got handed a flyer for Cleveland's 1st #fatbike Alley Cat, so that's happening. Now if I only had a #fatbike… pic.twitter.com/s7VVyZV1km

A man with a dead cyclist’s heart becomes an avid cyclist.

Baltimore Sun on the psychology of hit and run killers. Fascinating info there, along with the expected (and still infuriating) statement from AAA that cyclists should be more careful.

Are the yellow chain locks just for looks?

[Ad] The National Weather Service says our next bout of rain can be expected after Presidents Day. Be sure to buy some fenders

for your bike. I really like the SKS Raceblade fenders on my road bike; they mount easily and work well. As of this writing these are ranked #23 in that previous link in terms of sales volume, probably because they’re a little pricey. I haven’t tried the Planet Bike knock-off version

For more, visit bicycle news roundups from Biking In LA and Bike Portland,