A vision for Silicon Valley as a bicycle Shangri La

Nine percent of employees who work at Google’s headquarters in Mountain View, California currently bike to work. Google co-founder Sergey Brin has reportedly told shareholders that he is “annoyed” at having to pay $40,000 for each parking space. To that end, his company’s transportation planners have set a goal of 20% bicycle mode share for commuters.

To achieve that goal, the bicycling landscape must change dramatically throughout north Santa Clara County. The Bike Vision Plan outlines how Google believes this can happen. 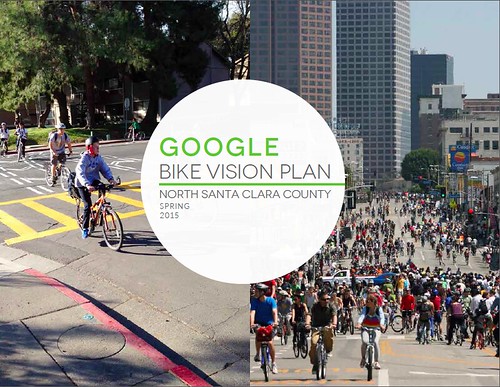 This plan, prepared by Christopher Kidd of Alta Planning, outlines Google’s vision for bicycle transportation around Mountain View and neighboring cities. For this plan, they define “North County” to be the area between the San Mateo County line to the north, Foothill Expressway to the west, Homestead Road to the south, and the San Tomas Aquino Trail to the east. This area includes the cities of Palo Alto, Mountain View, Los Altos, Sunnyvale, and part of the city of Santa Clara.

21% of Googlers who live within nine miles of work already bike to work on a regular basis. To capture an even higher percentage of those workers who live within biking distance of the office, Google says they must focus on three key factors: low stress facilities; bicycle-friendly programs; and what Alta Planning — which prepared the report — calls Continuity, Connectivity, Convenience and Completeness

To encourage more people to bike to work, Google says a systematic approach is needed because life happens outside of just work. Many people want to link errands, shopping and recreation trips with their journey to and from work. Bicycle Friendly Programs are the things that make biking more convenient at both home and destination. They include things like secure and sufficient bike parking, biking incentives, and things like traffic law enforcement. At work, bike-friendly amenities include showers and lockers.

We’ve all encountered facilities for bicycling that aren’t connected to the wider transportation network, or even to each other in any meaningful way. Google employees have some enviable options via the Permanente Creek Trail, the Bay Trail and the Stevens Creek Trail. 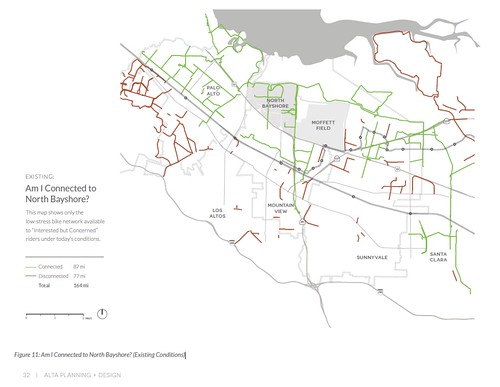 Lines on a map, barrier removal and bike amenities are all well known concepts, but plan author Chris Kidd of Alta Planning introduces the idea of mapping stress in Google’s Bicycle Vision.

Let’s start with my own example. My bike commute is almost completely on a grade separated, straight, smooth, well-paved and well-maintained bike path with no stress. Sometimes I hammer; sometimes I stop and enjoy the view. You might describe it as a walk in the park.

My previous commute involved riding alongside high speed traffic, a freeway interchange, and multiple large, high speed intersections where I constantly reminded myself to be “assertive, not aggressive.” This old commute was an amusement park adrenalin rush. Here’s a photo I shot when I used to commute here, and it’s very representative of conditions. Can you see the cyclist in this photo?

It can be done safely by competent cyclists interacting with mostly courteous drivers, but the older I get, the less I care for the thrill ride adventure, and I totally get that these conditions can induce significant anxiety for many people.

Drs. Maaza Mekuria and Hilary Nixon of San Jose CA and Dr. Peter Furth of Boston pioneered the concept of low stress bicycling and network connectivity. Say your five mile bike commute involves four miles of bucolic stress-free path with a gentle tailwind and angelic singing, but to get there you must share a mile of substandard width lanes of roaring, high speed truck traffic, multiple driveways and high speed merge ramps. The cumulative stress might rate highly, and most people probably avoid the beautiful trail because of that single, unpleasant segment. 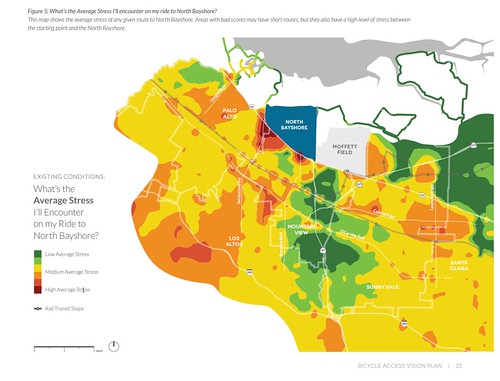 Life is good if you live in Mountain View anywhere along the Stevens Creek Trail. Your bike commute is a little less pleasant if you live in Sunnyvale near Central Expressway. Note the green island in Palo Alto and the huge sea of green in north Santa Clara which are surrounded by deserts of relatively higher stress.

Google’s Vision document concludes with “North County as Copenhagen,” in which Google proposes a complete, low-stress network of bicycle facilities connecting all of the communities of North Santa Clara County. They build on the existing county bike plan and tweak where necessary. Kidd then re-ran his stress simulations to come up with this map. 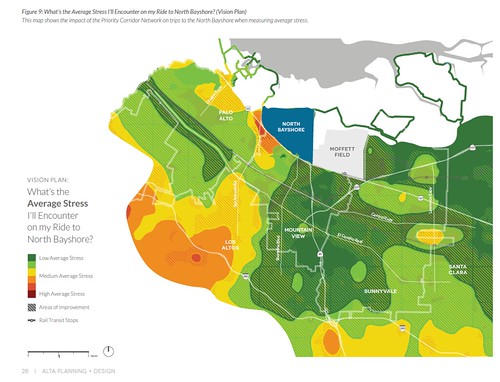 For more discussion, and to read the Google Bicycle Vision Plan in its entirety, visit the Silicon Valley Bicycle Coalition: Google Bike Vision 2015. Coincidently, the Santa Clara Valley Transportation Authority (VTA) begins the process of updating the county bike plan at the BPAC meeting this Wednesday, so this is a great opportunity to talk about this stuff.