Happy Monday. I can handle rain, sleet, lightning, thunder, wet socks, but then I arrive at the office this morning and discover the coffee maker is broken! I fear this combined with those red Starbucks anti-Christ cups littering the trail are portents of evil tidings.

Look for a brief collection of Monday bike news below this morning’s appropriately-portenous view from my back porch. 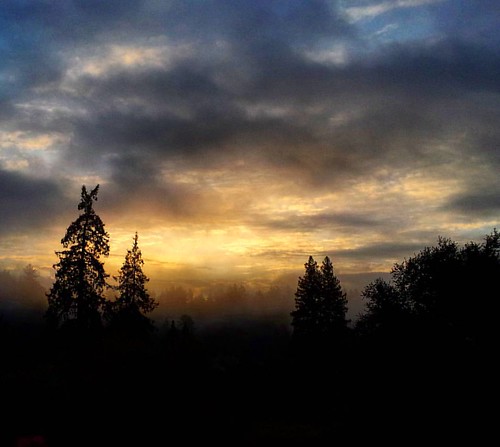 Since our Northern Hemisphere Days are so short this time of year, Sweet Georgia Brown discusses conspicuity with normal looking clothing for bicycling in.

Bringing awareness of public policy shortcomings in traffic safety vs actual risk assessment is one of those things I try to balance on these pages. The constant “YOU’RE GONNA DIE!” messaging from the media, from bike advocates and even the bike industry was in fact a major motivator when I began Cyclelicious over a decade ago. Longtime bike industry consultant Rick Vosper publishes his thoughts on media portrayal of cyclist fatalities.

Bike Chick in Seattle reveals her secret to not biking angry anymore.

Mark on sharing the road.

eBikes are apparently behind the increase in more crashes in Switzerland.

Draft EIR for the next phase of Highway 1 expansion in Santa Cruz County has been released. More on this later.

For night-time visibility, can I recommend these perfectly awesome Betabrand Disco Pants made from pure disconium?