I just learned that the legendary Jobst Brandt succumbed yesterday at age 80 after a long struggle with his deteriorating health. 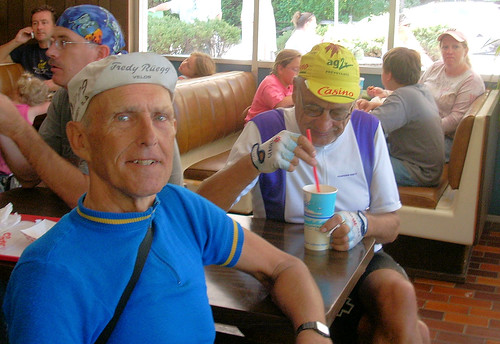 We weren’t friends, but I’d run into Jobst in his blue jersey (polypro, not wool) and his freakishly large bike (custom made Tom Ritchey 10-speed, six-speed cogs are too prone to failure, painted yellow because cracks are easier to see) during his Highway 9 rides and we’d talk. And oh how he loved his own opinion on every topic. Yeah, he was a little bit full of himself, but he also knew his stuff and he was mostly a likeable guy. One person famously described him as “not opinionated; he was correct.”

Jobst wrote the book on bicycle wheelbuilding. Some Internet and Usenet old-timers will recall how he held court on every cycling-related topic over at rec.bicycles.

Locally, Jobst was famous for leading insanely punishing off-road adventure rides all around the Bay Area with road bikes forty years before gravel riding became a marketing category. Among those who joined Jobst on these epic rides was local cycling author Ray Holser, who pens his own short obituary of Jobst’s long life here.