This wonderful weather we’re experiencing in California is great for riding but bad for our water supplies. 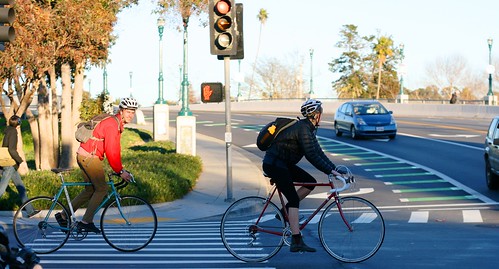 Cyclist hit by truck in West Oakland; thieves rush over not to help the poor stricken cyclist, but to rob him as he lays unconscious on the road.

Matthew Beaudin was hit from behind while riding near Boulder, Colorado. Police show up, immediately assume the cyclist is at fault and ticketed for failure to move over for passing traffic on the otherwise empty two lane he was on.

Commute without your car: “Nothing in this world is certain, except death, taxes, and traffic in your morning commute.”

Remember, NAHBS 2015 takes place March 6-8 in Louisville, KY. Yehuda Moon tells me he plans to be there.

Remember those guys who wore webcams on their heads and carried portable hotspots in backpacks to livestream their daily adventures through Justin.tv? You can do wearable live video for action sports from GoPro and Vislink.

San Francisco Police Department Commander Mikail Al tells bike hippies to stay out of the way of other traffic for safety.

The usual way to count people on bikes and foot involves an annual count involving volunteers sitting in folding chairs and lots of clipboards. It’s amazingly labor intensive. A tech innovator in Portland, OR suggests a less expensive way to count bicycle and pedestrian traffic.

The company formerly known as Alta Bicycle Share has a new name: Motivate.

QBP awards bicycle mechanic training scholarships for women. 800 women applied, which speaks to the tremendous interest in this field among women.

The film maker behind Velo Vogue has an interesting new project she calls Velo Visionaries Project.

How’s this video to segue from bikes to transit? How many of you all use public transit for transportation to your trailheads?

Transitmix tool so all of us can be amateur transit planners. Transitmix developers point out the easy drag-and-drop of routes gives immediate feedback on the tradeoffs made in route changes, which is great when demonstrating this stuff to the public. Via Human Transit, where you can see a good video demonstration of the tool in use.

You’ll recall Caltrain is buying surplus trains from Metrolink to increase trainset size from five cars to six. Caltrain has agreed that all of those extra cars on the Bombardier sets will be bike cars, increasing bike capacity from 48 to 72 bikes per train.