Welcome to that time of year when back-to-school traffic picks up. You can beat that traffic on Highway 87 and North First Street by riding with San Jose Bike Train Wednesday morning, August 19. We depart Diridon Station in San Jose at 8 AM for destinations north along the Guadalupe River Trail.

More bikey and transpo-y stuff below the typical view of the trail we travel on for Bike Train. 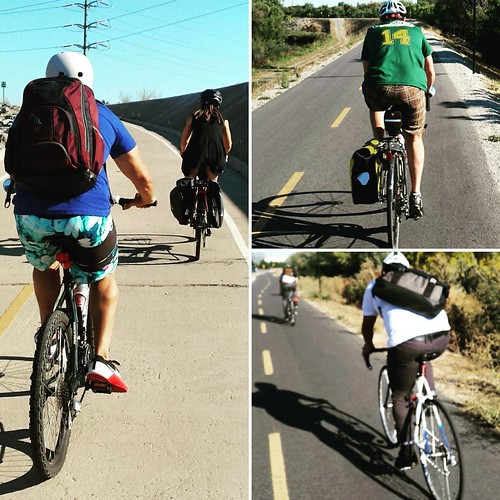 I’m a panelist at the Silicon Valley Bicycle Summit next week, where we’ll talk about how technology can be used to entice more people to ride bikes. I’ll bring a door prize.

Did you know of this project to track roadkill in California? They like to recruit cyclists and walkers to report roadkill, since we’re a little more likely to spot flat meat on our journeys.

Carlton is invited to explain why cyclists often don’t use cycle paths at a British motoring website.

Do you ride carbon? Read Jim Langley’s latest tech talk on things you should watch for with your frame.

Santa Clara Valley Transportation Authority (VTA) plans to pilot a dynamic response transit system in Sunnyvale and the North First area of San Jose to connect the “last mile” from transit centers to your destination. Think of the old “dial-a-ride” systems, except using a smart phone app and without the requirement for a 24-hour reservation (I hope). This program was briefly discussed at the VTA BPAC meeting last week, with public comment asking that VTA ensure bikes are allowed on this connector service.

Centers for Diseases Morbidity and Mortality Weekly Report focuses on cyclist deaths associated with motor vehicle traffic this week. On a population basis, Florida, Delaware and Louisiana are the deadliest states. Nationwide, cyclist fatalities decreased 44% between 1975 and 2012. Just from the year 2000, though, the number of people who report riding a bike at least six times a year has dropped by 37%. Reduced exposure by itself can likely explain most of this reduced fatality rate.