The special election to select the San Jose CA District 4 City Council is coming up on April 7, 2015. This map shows the D4 boundaries, which includes Berryessa, Alviso, and North San Jose. 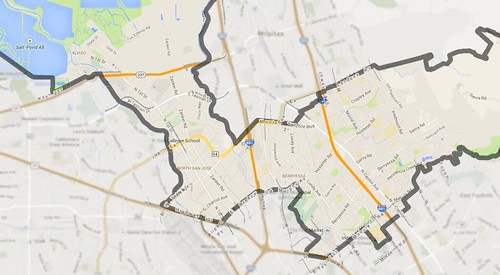 This is the seat vacated by Kansen Chu on his inauguration to the California Assembly. You may recall Chu infamously introduced that bill to require white flashing tail lights on bicycles. Can District 4 voters select somebody a little more knowledgable on bicycle safety and other transportation issues this time around?

I Walk / I Bike / I Vote says they’ll have a questionnaire for the nine candidates running for D4 within a week. Most of the candidates say little about transportation, traffic safety and land use in their online materials, so I’m curious about their answers. In the meantime, I scoped out a couple of those running for D4.

Among the nine candidates, Johnny Lee has distinguished himself with his unapologetic promotion of more freeways to ease congestion. He wants to “upgrade” the 880/101 interchange and the 880/237 interchange, foolishly believing these will allow free flowing traffic. He also wants to add lanes on I-680 and Highway 101 through San Jose.

Most of the other candidates don’t address transportation directly, but, like Lee, they seem to have a naive view of how nuanced and interconnected their world is. As a group, they seem unaware of the heavy, transit oriented mixed use development taking place right now in District 4, especially along the North First corridor and around the new BART station construction now underway through D4, and how these will completely change transportation flow throughout this part of San Jose.

The two standout candidates are Timothy Orozco and Lan Diep. Both Orozco and Diep demonstrate understanding of issues and a capability to work well with others. I predict a run-off between those two. Diep is the Republican, pro-business candidate endorsed by the Mercury News, while Orozco has the backing of the unions and the Sierra Club.

What bicycling, transportation, traffic safety, and land use questions would you include in a candidate question for District 4?