The photo below shows the typical heavy traffic on Tasman at Lick Mill. Due to heavy complaints from the public after the Pruneridge road diet, some council members have expressed reluctance about approving a similar project for Tasman. 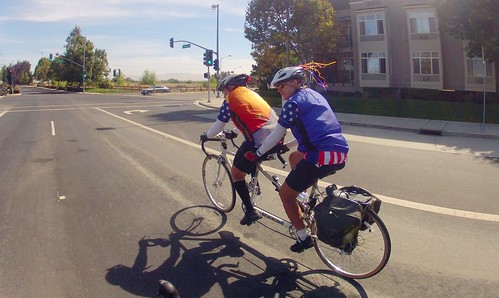 The city of Santa Clara paid a consulting firm $56,000 to officially state what city traffic engineers already knew and what I told you in 2013, which is that this portion of Tasman is ludicrously overbuilt. This six lane street has a capacity for 46,000 vehicles per day. The normal traffic volume is under 20,000 vehicles per day, which a four lane road can handle. The engineering study also looked at anticipated future demand and determined a four lane road is plenty for short-term and long-term build-out per the city of Santa Clara’s general plan.

The Santa Clara Public Works Department proposes reducing Tasman from six lanes down to four. Because Tasman is designated as a bike route in both the city and county bike plan, this lane reduction makes room for wide, buffered lanes. It will also make room available for VTA light rail track safety improvements, create opportunities for pedestrian safety improvements, and even improve traffic flow at Convention Center and at Centennial.

Because this portion of Tasman is already closed for major events at Levi’s Stadium, the lane reduction will have no impact on event-related traffic.

There is literally no downside for this project no matter which mode of transportation you use, so what’s the problem?

Once bitten, Council members can understandably be twice shy and take what they perceive to be the easy way out. 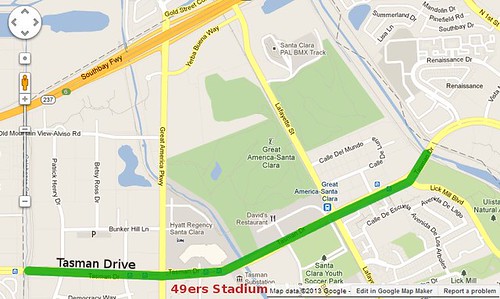 If you live or work in the city of Santa Clara, please write a quick note to the Santa Clara City Council on this issue. Council discussion and vote is scheduled for the evening of Tuesday, April 21, 2015 beginning at 7 PM. This item is early on the agenda so show up on time if you plan to speak on the Tasman road diet discussion.

Thank you to Pete for the heads up on this. Tasman street profile created with Streetmix. I realize the right-side train is travelling the wrong direction; oops. I go into a little more detail about Tasman traffic in Santa Clara here.