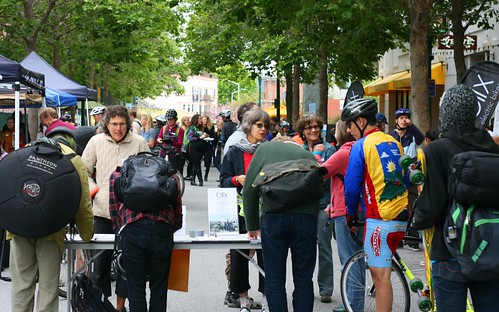 Santa Cruz County normally aligns their Bike to Work Day with the San Francisco Bay Area. This year, however, the Santa Cruz chapter of the All Power Bike Lobby decided to move it up to include the day in a whole week of bike events beginning with a bikey First Friday at the Santa Cruz Museum of Art and History. Because I work “over the hill,” I normally participate in BTWD festivities in Santa Clara County, but moving the day ahead a week in Santa Cruz allows me to double-dip and enjoy the event here as well.

The city of Santa Cruz normally blocks of a portion of Pacific Avenue in downtown the morning of Bike to Work Day. You’ll find several sponsoring vendors such as Verve Coffee and Jamba Juice here. A new ebike distributor, Blix, was on Pacific for demo rides. They’re also giving a bike away through a random drawing of those who fill out the Bike To Work Day survey. Volunteers were also on hand for bike registration. Mostly, people just mingled and talked to absorb the bikey vibe. It feels substantially more relaxed than the go-go-go! of Silicon Valley.

I also visited the Beach Street breakfast station at The Picnic Basket. People still rolled in in spite of the light, cold rain. 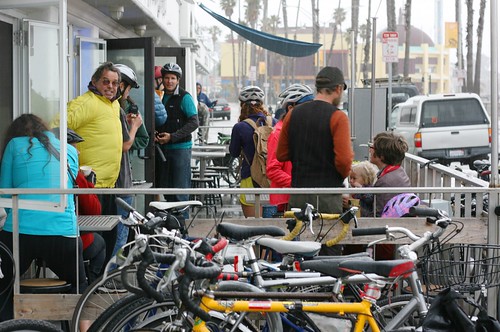 Remember, Santa Cruz Bike Week concludes with a Bike Party ride. The theme is Bike Prom, so ride in your formal wear.

San Jose Bike Party also rolls this Friday with a Star Wars theme (because “May the Fourth”); start location and route will be posted tonight.

Amgen Tour of California begins this weekend with a women’s race around Lake Tahoe. It’s snowing there today but the forecast calls for sun on Saturday.

SF Bay Area Bike to Work Day happens next Thursday, May 14, 2015. I’m supposed to ride with the VTA group ride from downtown San Jose to VTA HQ and then I’ll help man the Energizer Station at Oracle in Santa Clara on Agnew at Garrity where we’ll serve an epic breakfast, but I might instead assist beginner riders cross Highway 101 at Bowers / Great America if the San Tomas Aquino Trail closure isn’t resolved.