Richard MasonerFebruary 5, 20154 Comments on Transportation: 50 years of development in a 50 second bike video

Commuters in Silicon Valley and throughout the San Francisco Bay Area deal with the frustration of their daily car commute. Historically, transportation departments have defaulted to a solution that involves removing housing to make space for more highway lanes. 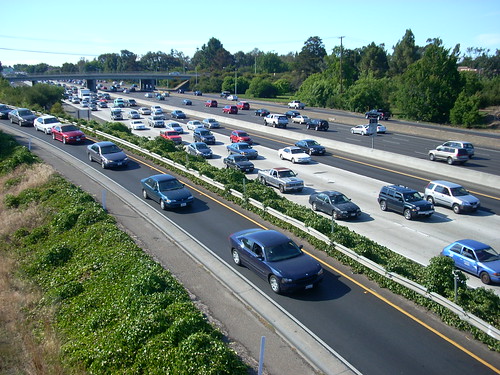 Many (most?) people still think widening roads is the obvious solution, without thinking about the system as a whole.

Let’s look at Santa Clara County, California, aka “Silicon Valley.” A half century of development policies among the numerous small cities and one large city has resulted in lots of housing in south San Jose and neighboring areas, and a concentration of jobs near the Bay side of the county, mostly on the Bay side of the Caltrain tracks and mostly in the cities of Santa Clara, Sunnyvale, Mountain View and Palo Alto. 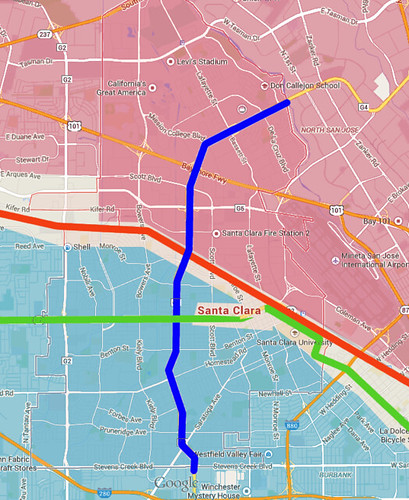 Is it any wonder, then, that portions of the north-sound San Tomas Expressway shown in blue operates at Traffic Level of Service “F” during the commute? Unless development patterns change, can we really expect traffic to improve even after the county builds more lanes?

Experience a taste of 50 years of planning that assumes a car in every driveway for long distance commutes in this rear view video I shot from my bike on southbound San Tomas Expressway approaching El Camino Real last night. I originally intended a box turn for that left onto eastbound El Camino Real, but after I saw a quarter mile of stopped traffic I just filtered my way over to the left turn lane.

About 30 seconds into the video, I split the lane past the VTA 22 bus. The 22 and its limited stop cousin the 522 carry 20,000 riders per day, but these high volume, efficient conveyances carrying 50 passengers are stuck in the same traffic as the single occupant schmucks taking up nearly the same road space.

VTA (our county transportation agency) plans to build a Bus Rapid Transit system on El Camino Real from San Jose, across this part of the city of Santa Clara, all the way to Palo Alto. The preferred alternative for those who think systematically is a dedicated busway.

This is not a sure thing, as many businesses along ECR along with the Silicon Valley Chamber of Commerce fear the loss of traffic and business when car lanes are replaced with dedicated bus lanes. I’m happy the Santa Clara city council supports this dedicated busway option for Bus Rapid Transit on El Camino Real.