Those in the San Francisco Bay Area no doubt noticed the cold front that whipped through our region over the Easter weekend. We’re pretty excited about the trace rainfall associated with that weather system. A second, stronger storm should arrive overnight, with a half inch or more of rain expected Tuesday morning. 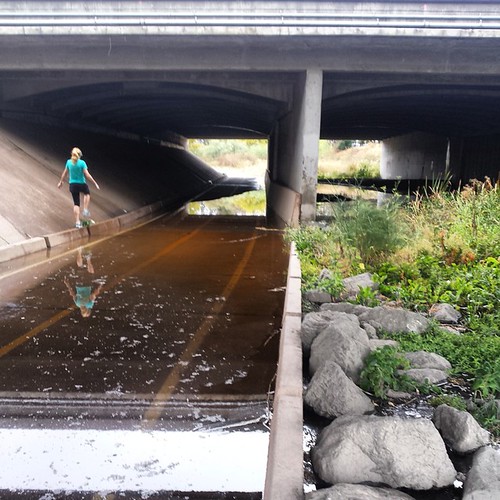 Remember, you can check the flooding status for selected Santa Clara County Trails on this page.

Wanted: Your Bike To Shop Photos!

I spend a lot of time quantifying the commute mode share of cyclists and talking about ways to increase that with programs such as Bike To Work Day, workplace incentives, and bike ambassadors for commuters. Somebody smarter than me noticed that even bike-friendly cities such as Portland, OR seem to max out at about 6% mode share because commuting by bike seems so daunting for the vast majority of Americans.

We’ve done the commute by bike thing to death, but what about other ways to normalize cycling? Can we encourage cycling with shorter, family friendly trips that don’t involve suiting up, special shoes, and waterproof bike luggage?

That’s the idea behind Bike To Shop Day in the San Francisco Bay Area. Organizers are signing up merchants and they’ll have fun rides to stores in various neighborhoods around the South Bay. The Bike To Shop Challenge is now underway. Submit your photo to the challenge page of a bike at a shopping location for a chance to win prizes.

Journalists, bloggers, and other writers for both new and old media use Help A Reporter Out (HARO) to find sources for their stories. Today’s HARO email contained a request from Anna Tinsley of the Fort Worth Star-Telegram for commentary from cyclists regarding pending transportation legislation. I’ve already sent this to Bike Texas, but others, especially those in the Dallas-Fort Worth Metroplex, may want to weigh in.

Perhaps I’m projecting, but I suspect a “war on cars” angle that needs to be nipped in the bud if possible. Lane reduction projects in particular benefit the population as a whole, and efforts to restrict funding on those types of projects really hamstring the efforts of people who want to improve safety and throughput on state-funded highways and roads.

I’ll make my annual trek-by-bike to the Sea Otter Festival in Monterey, CA on April 16-19. Who’s else is going?

I predict drones flitting overhead by the dozen, and perhaps even a head injury or two as an errant quad falls out of the sky. Raleigh will introduce their 2016 Cyclocross line. I’ll also take a look at Raleigh’s new Misceo IE, the first electric assist bike using the Shimnao STEPS electric bike kit.

Something like a Habitat for Humanity except with bicycles.

A triathlete website is one of the most visited bicycle product info websites out there.

How can we collect better crash data to improve cyclist safety?

Not riding a bike is hazardous to your health.

An interview with Anna Brones: Cooking, writing and bicycling.

City Labs reviews the documentary Bikes vs Cars and hits on the reasons I didn’t bother to previously mention that film on these pages.