Richard MasonerSeptember 6, 20163 Comments on Bike every State Park in your county?

I’ve touched thirteen of the sixteen California State Parks and Beaches in Santa Cruz County by bike, but never in a single day. What about hitting all of them in a single ride? 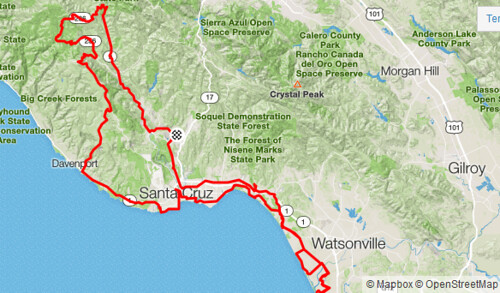 This route loops in every State Park and State Beach in the county, with 120 miles of riding and nearly 10,000 feet of elevation gain, which should take around 10 hours of riding time. Bring water, snacks, cash to replenish yourself, and maybe bus fare just in case. Once you’re in the hills you will lose mobile Internet service so be prepared.

If you bonk, bus service is available on parts of Highway 9 and along the Highway 1 corridor east (nominally south) of Santa Cruz, though headways can be long on the more isolated stretches. Fare is two dollars per ride with no transfers, no change given.

This route begins and ends at the large transit center park-and-ride in Scotts Valley, which has all day free parking, but you must be gone by sunset.

Prevailing winds are from the northwest and pick up significantly after about noon. This route is biased to hill climbs early in the ride, but you might wish to change your start / finish and direction depending on how much you hate fighting headwinds. Consider beginning your ride somewhere in the south part of Santa Cruz County, for example, so you have nice tailwinds when you return to the coast after your epic climb to Castle Rock and Big Basin.

What about just doing the State Beaches?

I hit the wall after around 100 miles these days, so I’ve also created a much less ambitious route that loops in all of the State Beaches in Santa Cruz County. 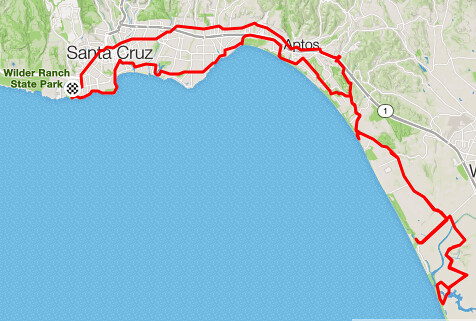 This coastal route covers 57 miles round trip but still involves an interesting amount of elevation gain. This route begins and ends at free street parking on Delaware Avenue near Natural Bridges. Without too much extra effort, you can even loop in the Coast Dairies, Wilder Ranch, Nisene Marks, and the Santa Cruz Mission, so you’ll hit every State Park except Castle Rock, Big Basin, and Henry Cowell.

Prevailing winds are from the northwest, and they generally pick up significantly after about noon, so start early lest you fight monstrous headwinds on the return leg. Alternatively, begin your ride in the south part of the county and enjoy tailwinds after the turnaround at Natural Bridges.