In April 2015, the Tampa Bay Times published a “biking while black” report showing that 80% of traffic citations issued to bicycle riders in the city of Tampa, FL are written to African-Americans, although they comprise only 20% of the population.

Tampa PD claimed their proactive policing improves bicycle safety, reduces bicycle theft, and stops other crime in the neighborhoods they patrol, mostly through pretext stops. Pretext stops are a Supreme Court approved method to circumvent Fourth Amendment protections against unreasonable searches and seizures. A traffic or equipment violation of any type is probable cause for the cyclist to be detained and questioned. If you ride no-handed, have a passenger on your bike, lack sufficient lighting and reflectors, or if the police officer believes you’re not riding “as close as practicable to the right-hand curb or edge of the roadway,” you’re subject to a stop and frisk.

The Tampa PD, to their credit, asked the US Department of Justice Office of Community Oriented Policing Services (COPS) to evaluate their policy of targeting people on bikes. COPS looked at the department’s stated goals, crunched some numbers, and found their targeted enforcement of people on bikes had little to no impact on safety, bike theft, or crime in general.

I may discuss the other findings in this report later, but I’d like to focus on the wider implications of the first set of findings, which deal with the relation between bicycle traffic stops and bicycle safety.

I lifted this table from the COPS report An Examination of Racial Disparities in Bicycle Stops and Citations Made by the Tampa Police Department. “After TBT Article” shows the time period after the Tampa Bay Times published their biking while black story in April 2015, after which Tampa police suspended their enhanced enforcement of traffic law on cyclists.

The COPS researchers asked “Do bicycle stops reduce the number of bicycle crashes?” They highlight their findings in this narrative: 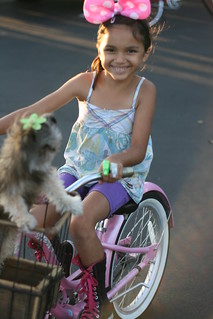 My personal opposition to even juvenile helmet laws is due in part to its overuse to harass children in some California cities, which in turn discourages them from riding bikes. While this doesn’t apply in Florida, obscure and frequently violated equipment requirements for bells and side reflectors are also frequently used as a pretext to stop the usual suspects.

We can’t know if this very specific example from a few neighborhoods in Tampa, Florida might apply to the rest of the nation, but it fits the narrative of many bicycle safety advocates that enforcement should focus more on those who are capable of causing the most danger and havoc. Supposed Vision Zero efforts that work to correct cyclist misbehavior can be better spent on motorist misbehavior. IMHO.