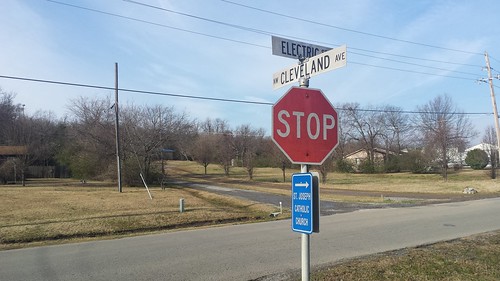 The “stop sign as yield” proposal is often called the “Idaho stop” because a similar law was pioneered in that state in 1982. “Dead red” is the common name for laws allowing people on motorcycles and bicycles to run red lights when a traffic signal does not detect their presence. This is different from the law allowing motorists to treat “defective” traffic signals as all-way stops; these only apply when the lights themselves fail to work for the entire intersection.

Several states have a dead red law on the books, but only Idaho has stop-as-yield. If passed, Oklahoma becomes the second state in the United States to allow cyclists to treat stop as yield. The text of the new law would read:

B. A person operating a bicycle approaching a steady red traffic control light shall stop before entering the intersection and shall yield to all other traffic. Once the person has stopped, the person may proceed through the steady red traffic control light with caution. Provided, however, that a person after slowing to a reasonable speed and yielding the right-of-way if required, may cautiously make a right-hand turn. A left-hand turn onto a one-way highway may be made on a red light after stopping and yielding to other traffic.

I like that this law doesn’t have a minimum time requirement for the red light like some states do. If I take the same route every day, I already know the light won’t trigger for me, and I don’t need to wait to figure that out.

Via Paul and Oklahoma Bicycling Coalition. Follow the progress of this bill at Legiscan.com.