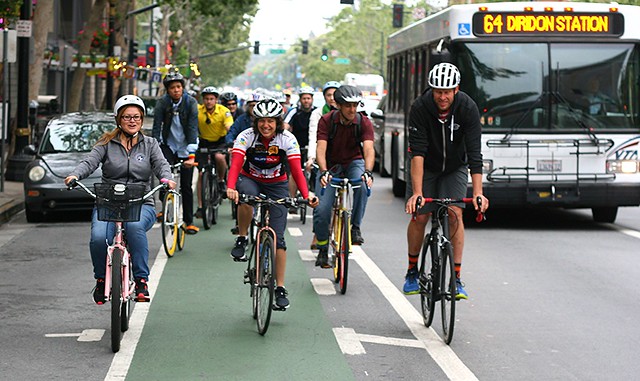 On Bike to Work Day last week, I participated in the “Movers and Shakers” ride organized by the Santa Clara Valley Transportation Authority (VTA) and the Silicon Valley Bicycle Coalition (SVBC) from downtown San Jose to North San Jose. MTC, which does transportation planning for the nine county San Francisco Bay Area and organizes Bike to Work Day for this region, used video from this ride for their retrospective short on the day.

The “Movers and Shakers” ride gives you the opportunity to ride with some of the influential big wigs in Silicon Valley politics and bike advocacy. In approximate order of appearance, other people of my acquaintance who appear in this video include:

Please let me know in the comments if you appeared in this video and I missed you. I looked for others of my acquaintance that I know participated in the ride but didn’t spot you.

You can see many of these people in better detail in my Bike to Work Day photo collection here.