Feb 1 2016 Update: Online registration available here. The shoulders on I-5 are open to cyclists between Oceanside Harbor Dr. and Las Pulgas Rd. in both directions for cyclists who are not able to access Marine Corps Base Camp Pendleton, according to Caltrans District 11.

Travel between coastal Orange and San Diego Counties has required transit through a large military base since the Marine Corp established Camp Pendleton in 1942. Beginning in March 2016, the base will begin to require pre-registration for those traveling through by bike. 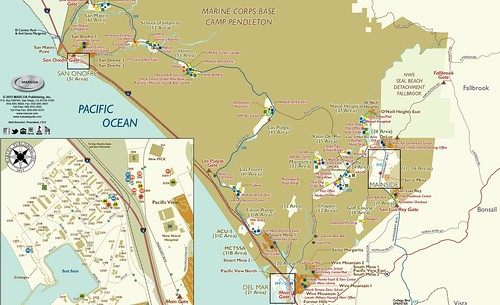 United States Marine Corp Base Camp Pendleton announced annual pre-registration will be required for those traveling across the base by bike beginning on March 1, 2016. An American state issued ID will be required for registration and subsequent base entry. Those with Canadian, Mexican, and other foreign identification will be denied entry and need to find another way around unless they can find a base sponsor. No additional regulations were announced for those traveling by car or truck through the base on Interstate Highway 5, regardless of citizenship or residence.

Travel across Camp Pendleton is the route between the cities of San Clemente in Orange County and Oceanside in San Diego County along the California coast, even for those driving on the Interstate. For locals who routinely ride this route, this pre-registration step is only a minor annoyance, but it can really mess things up for the thousands of out-of-state visitors who bike this route down the California coast every year. The online pre-registration process will be available Real Soon Now; there’s no word on how long this pre-registration step will take. There’s also no word on how Joe Off-The-Grid is supposed to pre-register if he has no Internet access.

Via the San Diego Bicyclist Forum:

Camp Pendleton wanted to give you an update on our visitor access policy. We value the great relationship we have with the area cycling community and wanted to develop a process allowing bicyclist’s continued access to Camp Pendleton. By Mar. 1, bicyclist will be required to register in order to have access to the base. An online process will be complete mid-February and base access will be good for one year. Bicyclist will need to re-register every year. Until the registration process is finalized, bicyclists will still be able to enter the base with their U.S. or State government issued identification card just like now. After Mar. 1, all bicyclists will need to be registered and show their U.S. or State identification when entering the base. Once the registration process is up and running in a few weeks, we will share the link. Our goal is to maintain a great relationship with area riders but also balance that with security and protection for our Marines, Sailors, civilian employees and families. Thank you for your patience and understanding.

A subsequent inquiry from San Diego Bicycle Coalition board member Serge Isaakov confirms that those with foreign ID are out of luck, though this has been the case since the base first instituted the ID policy in 2005.

Caltrans has not been consulted on this decision, and bicycles remain prohibited from the I-5 shoulders between Oceanside and San Clemente.

Public access was first, the military base came later

Much of the historic El Camino Real in San Diego County became U.S. Highway 101 beginning in the 1920s, when the state widened and paved this public road. When the Marine Corps established what was then America’s largest military base here in 1942, Route 101 remained opened to public access.

I-5 built in 1960s was closed to bicycles, but access roads through the base, and the old and deteriorating Highway 101 through Camp Pendleton remained opened to people traveling by bike across coastal San Diego County. Long distance cyclist Pete Penseyres of RAAM fame used to commute through these back roads in the 1970s, and apparently convinced Caltrans to pave some of these access roads after he made a pest of himself to local officials.

From 2001 to 2005, this bike route was closed because terrorism: people on bikes dressed in skin-tight lycra are apparently more dangerous to Marines than the multitudes of large trucks capable of hauling who-knows-what that traverse the base daily on I-5. During this time, Caltrans reluctantly agreed to open the shoulders on I-5 to bicycle traffic because no other route was available. I’m told by those who’ve cycled this route that it’s far from enjoyable.

Roll on bike service is available on the Amtrak Pacific Surfliner and on the Metrolink Orange County Line trains, though rules apply.

I think the only bike option is to detour way the heck out through Temecula, which adds 60 miles and 4000 feet of elevation gain to your trip. Those who know the area better than I please chime in with your corrections and suggestions.