The show begins with a discussion of homicide by car. You’ve heard or seen this claim before both here and elsewhere: If you want to kill somebody and get away with it, run them over with a car. 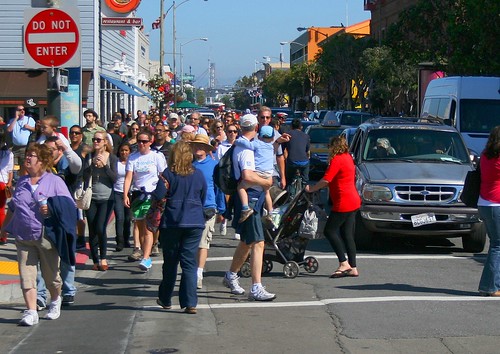 This is a lead in, however, to the issue of pedestrian fatalities both in New York City and nationwide. The show moves the focus to the issues traffic safety experts have beaten the drum on for a few decades. From the transcript of the show:

DUBNER: Okay, so that is a massive improvement, to be sure. How did this happen? How did pedestrian deaths fall so much?

NOLAND: The policy that we followed on trying to save pedestrians is to stick them in cars, so they are no longer pedestrians. And that will reduce your pedestrian fatalities ‘cause you don’t have as many anymore.

DUBNER: Robert Noland is director of the Voorhees Transportation Center at Rutgers. He says that as the automobile rose to exalted status in America, the roads – and the entire landscape really – were built to privilege them, the cars. This is most pronounced in the parts of the country with high pedestrian and bicyclist deaths, like the Southeast.

NOLAND: They focus very much on traffic flow and making the roads wider, straighter, and faster. With the assumption that that’s safer. And what a lot of the guidelines do is they look at freeways, which are very safe, and they’re safe because it’s controlled access. You don’t have any intersections. And they take those sorts of design guidelines and they apply it to a city, to city streets or suburban streets and create these very large arterial roads, which tend to be the most dangerous roads whether for drivers or for pedestrians.

I’ve summarized some highlights of the show below, but the show itself is a good introduction to the traffic safety topics I like to focus on. Invest a half hour listening online, or you can read the transcript here.

The show is about pedestrian safety on public roads, but many of the same issues apply to those who ride bicycles.