Steal a bike from a public school or college campus in Arizona and you may have a felony record if Arizona SB 1481 passes. 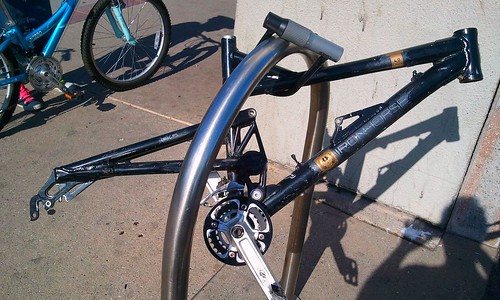 Currently in Arizona, theft of anything under $1000 in value is considered a misdemeanor, generally punishable by less than a year in the county jail. Misdemeanors are at the very bottom of the priority list for local prosecutors, so police generally don’t spend time investigating bike thefts, and even those who are caught are immediately released.

Senator Andrew Sherwood’s SB 1481 would promote theft of a bicycle from the grounds of a school, college or university to a “Class 6 Felony,” which is Arizona’s least serious class of felony. But still, you’d get a felony on your record if you steal a bike from a college campus.

Here’s the current text of Section 1. Section 13-1802, Arizona Revised Statutes, with the proposed addition in ALL CAPS BOLD TEXT as pasted from SB 1481.

Theft of any property or services valued at less than one thousand dollars is a class 1 misdemeanor, unless the property is taken from the person of another, is a firearm, IS A BICYCLE TAKEN FROM SCHOOL GROUNDS or is an animal taken for the purpose of animal fighting in violation of section 13‑2910.01, in which case the theft is a class 6 felony.

SB 1481 also defines “school grounds” as “IN OR ON THE GROUNDS OF A PUBLIC OR NONPUBLIC KINDERGARTEN PROGRAM, COMMON SCHOOL, HIGH SCHOOL, COLLEGE, COMMUNITY COLLEGE OR UNIVERSITY.”