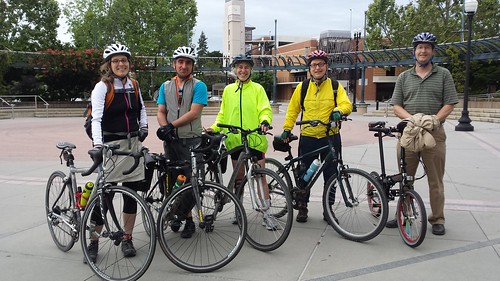 Lauren (far left) led this morning’s ride, joined by Christian (also of VTA), Laura (City of San Jose DOT), Gustav and Jim (on the folder) along with Yours Truly (behind the camera). Lauren started this BikePool route because riding in a group is more fun than riding solo, and riding in a group enhances safety for everybody involved when riding with automotive traffic.

Sunnyvale to San Jose Bikepool begins at Plaza del Sol across from the Sunnyvale Caltrain station. We crossed the station platform to Frances Street, then right (east) on California Avenue, north on Fair Oaks, east on Arques / Scott, north on the San Tomas Aquino Trail, east on Agnew, left on Garrity, across Lick Mill Road and to the River Oaks bridge on the Guadalupe River Trail. A good time was had by all.