Honjo Koken hand fabricates 20,000 metal fenders each year. They’re regarded as the best bicycle fenders in the world, and are priced accordingly at $150 and up. Honjo fenders mostly made from aluminum or brass, but the Honjo rep visiting the North American Handmade Bicycle Show in Sacramento has a prototype titanium fender on display. 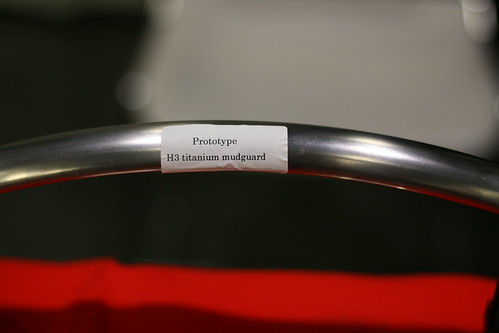 The rep tells me they plan to begin production of this H3 Titanium Mudguard beginning sometime in the spring. Titanium fenders would look mighty fine on just about any custom bike.

Over the past few years, Japanese builders and other vendors have become a regular presence at the annual North American Handbuilt Bicycle Show.

END_OF_DOCUMENT_TOKEN_TO_BE_REPLACED

Do you know about those delivery bicycles with small front wheels and large front baskets? In Japan, these bike are apparently marketed for carrying your pets.

This is the Coloco “Potta” — pronounced “po tah” (think how a Japanese person might pronounce porteur) — which retails for the equivalent of $360 American plus shipping.

Another example is the Maruishi Pet Porter, available in the “stylish” X frame shown below, or the more traditional frame that they describe as “cheap and cute.” These Maruishi bikes are more expensive than the mail-order Coloco bikes at around US$500.

The pet carriers are designed specifically for the bikes. The bikes themselves include features such as a locking steerer so the front wheel doesn’t wobble and fall over when parked.

In the 1970s and 1980s, Maruishi tried to sell entry-level road, mountain, and touring bikes in the US market without much success. Some low-end Maruishi bikes were also sold under the Jamis brand. Maruishi still sells the entry level “Emperor” line of touring, cross and road bikes to the Japanese market.

END_OF_DOCUMENT_TOKEN_TO_BE_REPLACED

Cosplay Mode magazine shows how you, too, can pretend to be the teen road cyclists of “Yomamushi Pedal”!

END_OF_DOCUMENT_TOKEN_TO_BE_REPLACED

Social media has exploded with discussion of this Japanese anime short about high school student Hinako and her attempts to beat her classmate Takano to the top of the hill. Sir Bradley Wiggins shows up to magically transform utilitarian but clunky mamachari into a sleek racing machine.

END_OF_DOCUMENT_TOKEN_TO_BE_REPLACED

Posted In japan | video
Manage Cookie Consent
To provide the best experiences, we use technologies like cookies to store and/or access device information. Consenting to these technologies will allow us to process data such as browsing behavior or unique IDs on this site. Not consenting or withdrawing consent, may adversely affect certain features and functions.
Manage options Manage services Manage vendors Read more about these purposes
View preferences
{title} {title} {title}