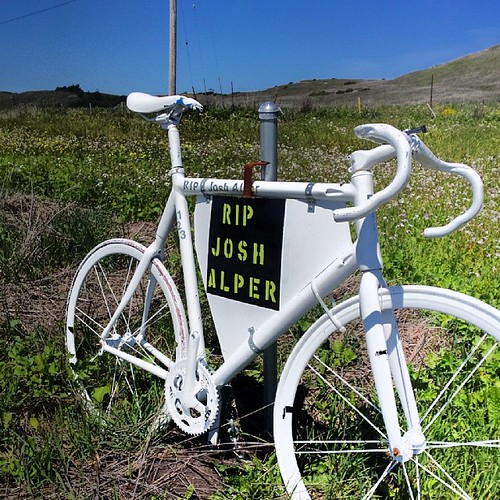 By February, Jain was arraigned and charged with misdemeanor vehicular manslaughter. Earlier today, Jain entered a plea of no contest, according to the the Santa Cruz Sentinel. Prosecutor Greg Peinado said his office will ask for the one year maximum penalty at the sentencing hearing in July.

The misdemeanor charge and potential penalty may not appear much for taking a life, but compare against another careless driving case that resulted in death for a cyclist, this time in San Francisco. Although the SFPD initially fumbled the investigation, they eventually concluded that the truck driver swerved his vehicle into the cyclist, Amelie Le Moullac.

The police presented their evidence to the office of San Francisco prosecutor George Gascon, who had famously announced he wanted to “send a message” to careless vehicle operators and hold cyclists “to the same standard as anybody else operating any other type of vehicle” when he aggressively prosecuted the only two cyclists in San Francisco history known to kill pedestrians due to their dangerously careless riding.

Cyclists throughout the San Francisco Bay Area were outraged by the news earlier this week that San Francisco attorney Gascon would not prosecute the truck driver allegedly responsible for the death of Amelie Le Moullac. “We are unable to prove this case beyond a reasonable doubt,” said a spokesman for San Francisco’s attorney’s office.

A change.org petition is now online asking Gascon’s office to file charges against the driver who turned his truck into Le Moullac.

Gascon comes up for re-election in 2015.