More bike news below this group of people seen biking down Stevens Creek Boulevard on a Friday night. 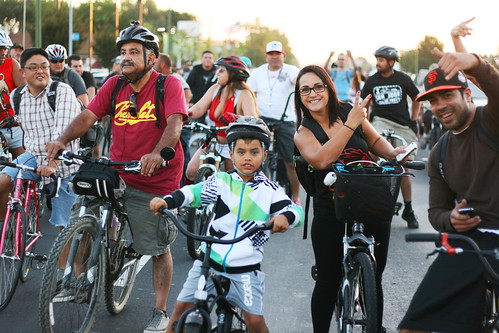 I’ve been meaning to post a report on the Levi’s Stadium Community meeting that took place earlier this week but haven’t gotten around to it yet. There’s a lot of commentary here from those who participated at the meeting if you’d like a gist of what happened there.

An avid cyclist with a windshield perspective warns those cyclists who shoot video of scofflaw motorists to stop it, or else they’ll get what’s coming to them.

Check it out: a three speed planetary gear crank that doesn’t require bottom bracket modifications. It’s been in development for at least five years but should be available Real Soon Now according to the developers.

City Lab: When harassment of cyclists is a crime.

Bike enthusiasts take part in L’Eroica, a retro cycling event on October 5, 2014 in Gaiole in Chianti near Siena. More than 5000 competitors from all over the world, wearing vintage cycling jerseys, took part in L’Eroica through the ‘Strade Bianche’, the gravel roads of the Chianti area of Tuscany. Photo by GIUSEPPE CACACE/AFP/Getty Images.

Local bike guy Kickstarter: Veloloop to electronically trigger traffic lights. There’s even an LED indicator to show if you’ve been detected or not.

Actress Amanda Bynes says she hopes to move from California to New York so she can ride a bike there.

She likes walking and riding her bike. In California, you have to drive everywhere. “I really do not enjoy driving,” Bynes said. “I don’t like the way I look in a car. The lighting is very bad.”

University of Iowa has a handbuilt bicycle program.