Confidential to Moscow With Love: Y2fEjdGT1W6nsLqtJbGUVeUp9e4=

I work in Santa Clara County, California. This is the region those of you outside of Northern California might know as Silicon Valley, where we have 1.8 million people working 1.2 million jobs driving 45 million miles every weekday.

This means cycling on roads that look like this in Bicycle Friendly Palo Alto, for example. 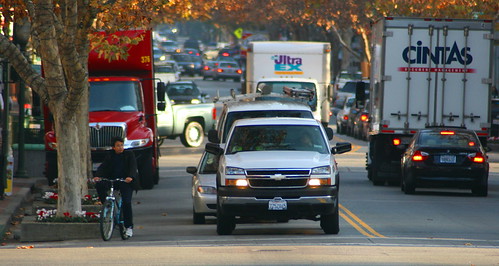 We still have plenty of traffic even on some of the more remote roads more suited for long distance recreational rides. Sometimes, conflict results that can reduce some of the enjoyment of these rides.

Over this past month, I’ve had occasion to ride in Santa Clara County between Morgan Hill and Gilroy. I was delighted to ride on reasonably smooth, straight, quiet and mostly empty roads, especially on the east side of Highway 101. Most drivers change lanes completely to pass, and on the few occasions when an oncoming vehicle approaches, every driver has patiently waited behind until it’s safe to pass, with no punishment passes or attempts to crowd me off of the road. It’s really kind of nice.

The heavy garlic and horse pasture odors can be a little off-putting at first, but you get used to it. The prevailing winds out of the north really pick up starting at about 10 AM, so plan accordingly.

Hey, don’t forget to post your caption for the armored cyclist. My mishmash of bike stuff below the photo of the woman cycling near the site of the former Berlin Wall.

David and Michael were just riding along when Dave bumped into Mike, and next thing you know Dave loses a lawsuit to the tune of one point six million clams in Australian currency.

Washington DC Council considers a vulnerable user ordinance for the District. More discussion of this at Streetsblog and local discussion at Greater Greater Washington.

AZ Bike Law asks how many traffic infractions have you committed today? There are some minor differences from California law (i.e. California drivers are allowed to enter any available lane after a left turn so long as you don’t bump into somebody else), but you get the idea.

Jason Gay (the cyclist at the Wall Street Journal) on staying in shape over the winter, for real this time.

25 MPH speed limit for New York City streets. How many Californians know that the default speed limit for school zones, residential areas and business districts is 25 MPH by state law unless otherwise posted?

Maybe if male cyclists didn't feel the need to dominate the roads like they do every other public space, we might have more women on bikes.

Chevron owns a 3,000 acre petroleum refinery in the city of Richmond, CA, just east and north of Oakland. Once a decade or so, fires and explosions results in the release of noxious fumes, which in turn results in hospital admissions for hundreds of Richmond residents who are exposed to these fumes. In spite of $3 million in spending by Chevron for city council candidates who support the refinery, city residents selected those opposed to the refinery in this week’s elections

A look at bicycle politics in Memphis:

Memphis’ recent bicycle boom has created only superficial changes to the city’s image and effected no real change in divisions along city and suburban lines, profound racial residential segregation, and stagnant population growth.

Why? Because bicycle advocates in Memphis are an elite white consumer citizen class who, in partnership with Memphis Mayor A C Wharton’s government and local developers, crafted an amenity-based urbanism that reinforces their power.

A response to this at the Memphis Flyer.

There’s a gun-totin’ bicycle riding hooligan on the loose in Cleveland.

Prepare yourself for the annual collection of videos showing cyclists swept by Lake Michigan waves from the Lake Shore bike path in Chicago.