Last February, Senator Liu introduced her mandatory helmet and high viz clothing bill for adults to much fanfare, followed by significant opposition from a number of cycling organizations throughout California. This morning, Ms. Liu amended her bill and re-introduced it to the Senate Transportation Committee, along with this statement from her office.

The bill was amended to create a comprehensive study of bicycle helmet use in California and evaluate the potential safety benefits of a mandatory helmet law. Carol believes in consensus-driven policy, and there were too many conflicting opinions about helmet use. A study will provide the data needed to guide us to the next step.

The amended bill would require the California Office of Traffic “Study” (sic) to “conduct a comprehensive study of bicycle helmet use, including, but not limited to, determining the percentage of California bicyclists who do not wear helmets, and the fatalities or serious injuries that could have been avoided if helmets had been worn. A report of the study’s findings shall be submitted to the Senate Committee on Transportation and Housing and the Assembly Committee on Transportation by January 1, 2017.”

The text of the bill still presumes helmets will provide a public health benefit. I’m told the word “study” like this is the kiss of death for bills — it allows legislators to save face and say they’re doing important things while they wait for the bill to quietly die in committee, but let’s look at 2014 Santa Cruz bike fatalities as a fer instance and guess how the OTS might decide on this.

The photo at the top of the page shows the dozen cyclists captured by my on-bike camera while riding around the city of Santa Cruz yesterday afternoon. Seven of these cyclists are helmeted, five ride without helmets. This more or less matches the statistics collected by the County Health Department during their annual bike count. Interestingly, of the three apparent minors on bikes, only one of them wore a helmet. 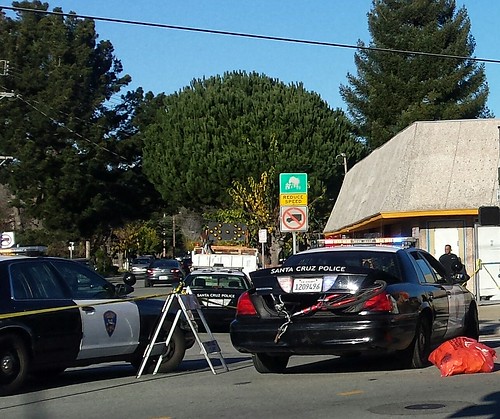 The single bike fatality in the city of Santa Cruz for 2014, Mr Jose Adan Lainez, was reportedly not wearing a helmet. Given that the driver who killed Mr Lainez also knocked a traffic signal post 30 yards down the road, I have no idea how the Office of Traffic Safety will determine if a helmet could have saved Lainez’s life.

We had two more cyclist fatalities in Santa Cruz County outside of the city of Santa Cruz. Last February 2014, a 50 year old man on a Highway 9 road ride perished after an unspecified “medical emergency” — apparently a heart attack or a stroke. In April 2014, a wrong-way cyclist riding near midnight lost control of his bike and fell into the path of an oncoming motor vehicle. In that case, the driver fled. Helmet use was not reported by the media, but I’m not sure it would have made a difference in either case.