Happy Friday, all. Bike Month continues with all kinds of fun activities. The Amgen Tour of California Women’s Stage Race begins today at South Lake Tahoe (assuming they don’t get snowed out); I’ll be there Saturday to watch the racing.

Read more bike news below the photo of parked bikes outside of a local cafe down the street from my home. 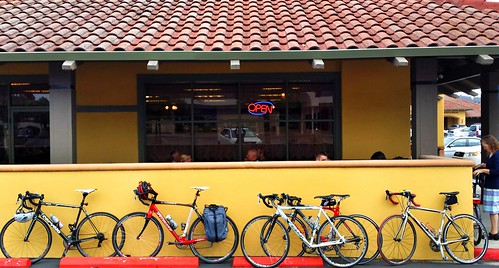 Bike Santa Cruz County releases their Santa Cruz County State of Cycling Report 2015. I had previously leaked some details such as the astounding $800M revenue brought to the county by the bicycle industry here. That makes the bike industry larger than tourism and agriculture, which each generate $500M in revenue.

The program aims not only to serve experienced bicyclists by mapping out longer routes. Most of the signs will bring bicyclists through neighborhoods, around UCSC and to points of interest, such as beaches and downtowns.

Another from the Sentinel: Santa Cruz board green lights ‘parklet’ pilot. This pilot program will allow business owners to convert a street parking space in from of their business from a paid parking spot into a mini-park, generally with amenities like tables and so forth. Interestingly, some city council members are reticent because they feel it’s the city’s “responsibility to provide parking.” The city also expects to lose as much as $12,500 in parking revenue in this pilot program.

My neighbor Neal-the-mad-scientist designs yet another electric bicycle.

Massive cleanup of a notorious drug den in Santa Cruz’s Pogonip Park yields several railcars worth of trash, including a number of bicycles and bike parts.

[Ad] This is still a work in progress, but I’ve started a Captain Safety category of bike products showing the top-selling bike safety items at Amazon.com.

Bay Area Bike to Work Day happens on Thursday, May 14, 2015. Bay Area workers and residents should sign up for the Team Bike Challenge. I’ll take part in the VTA ride from downtown San Jose to VTA headquarters, then sprint to Santa Clara Oracle to man the final hour of the Energizer Station on Agnew at Garrity. Drop by and say hello!

This is intense: Family Screams ‘Murderer’ Outside Court At Man Accused Of Running Over Livermore Mom, Baby.

The new Rotary Play Garden on the Guadalupe River Trail in San Jose opens May 23, 2015. I’ve been watching the construction as I bike past and it looks fantastic.

Unlike what I incorrectly reported yesterday, San Jose Bike Party takes place next week, not tonight. My apologies.

San Diego Mayor says he wants his city to be among the bike-friendliest in the world.

The Central Coast leads the state in per capita cyclist fatalities. I didn’t see this coming.

Feature on the Davis Bike Collective in Davis, CA.

Pedal The Plains is a three day tour of Colorado and Nebraska.

United Nations Secretary General Ban Ki Moon announced the appointment of Jean Todt as his Special Envoy for Road Safety. Todt, a former race-car driver, is president of Fédération Internationale de l’Automobile (FIA). FIA is well known as governing authority over Formula One and World Rally racing, but their primary aim is “to represent the interests of motoring organisations and motor car users.” The European Federation of Road Traffic Victims calls foul on this appointment.