Light Up the Night Ride is a bike ride and bike light giveaway geared toward promoting safe night bicycling. On January 30th from 5-7 PM, come down to the Santa Cruz Museum of Art and History to enjoy pre-ride activities that include bike decorating, live music by SUBPAR, and more. The bike ride will depart at 7 and last 1-2 hours. Bike flair and bright costumes are highly encouraged! There will be prizes awarded to the brightest bike, brightest rider, and most creative get-up. There will also be free bike lights given to the first 50 attendees! More info at the activity page on Facebook. Light up the Night is a project of People Power & Green Ways to School. 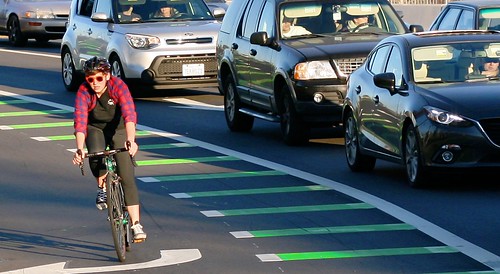 Also in the Sentinel: New green lanes on Laurel Street, as shown on Laurel at Front in the photo above.

Velocruz Cycling partners riders with local non-profits to bring awareness to social and environmental causes through custom team rides and special events. Join VeloCruz on their kickoff Ride to Benefit People Power, Sunday January 25th at 8:00 AM. The 62-mile ride is free, with a $40 suggested donation to benefit People Power’s advocacy work.

See this Groupon deal for Spokesman Bicycles in Santa Cruz.

If you haven’t found him yet, Steve Piercy has been covering some cycling-related happenings in Santa Cruz County at his website, focusing mostly on Mid-County where he lives. You can also find him on @Twitter. Drop by and say hello.

Finally, please look at this update from the Santa Cruz Police regarding the cyclist hit-and-run fatality that occurred the day after Christmas. They’re still looking for the driver of either a white Toyota Tundra pickup truck, or a 2006 to 2008 Ford F150 single cab pickup truck which will have damage to the right front area as well as the passenger side door and passenger side mirror. The police point out, “Someone in the community knows that truck and the driver who would have been traveling on Soquel Avenue around 6:36 a.m the day after Christmas.”