I live in a small town of 12,000 people in the Santa Cruz Mountains which received funding to rework a major intersection in town. The final design misses several opportunities to improve the intersection for those traveling on foot and on bike. 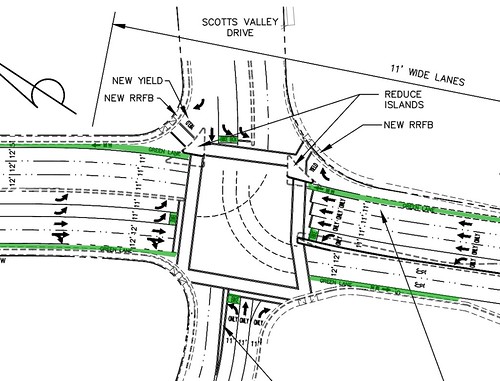 A note about directions: Mt Hermon at this intersection is aligned more north-south, and Scotts Valley more east-west, and the engineering documents refer to them that way. I think of Mt Hermon overall, however, as a east-west road, and Scotts Valley Drive as a north-south road, and the drawing has been slightly rotate to reflect this, so those are the directions I will use. I hope this isn’t too confusing.

The public input process took place in 2008, when I was new to town. I’m fairly certain I wouldn’t have known back then how to critique this project. I do now, though, so let’s use this as a case study so you, too, can know what to look for.

The above drawing shows the new design. The east-west road is Mt Hermon Road, a 35 MPH arterial which carries 33,000 vehicles per day (VPD); north-south Scotts Valley Drive handles 17,000 VPD. Mt Hermon has the green light signal priority, with demand actuation for Scotts Valley Drive and Whispering Pines. The major changes for this “operational improvement” at this intersection are replacing a long right-turn lane so it becomes a third westbound through lane on Mt Hermon, and extending the queue length of the westbound left turn lane from Mt Hermon to Whispering Pines.

Other changes include reducing the size of the pedestrian islands, adding “RRFBs” (pedestrian flashing signals), green paint for the existing bike lanes, and advance stop line “bike boxes” to the left turn lanes. I believe these will be the first such bike boxes in Santa Cruz County, for whatever that’s worth.

Let’s look at this design to see what you, too, should look for.

I’m sure there’s more to look at, but these are good starting points for discussion.

This intersection will come up for discussion at the Santa Cruz County Regional Transportation Commission (SCCRTC) Bicycle Advisory Committee (BPC) meeting coming up 6 PM on Monday, June 6, 2016 at the SCCRTC office, 1523 Pacific Ave, Santa Cruz, CA. Other items on the agenda for next Monday’s meeting include: