Here’s an interesting bill introduced by Democrat Representative Anna Moeller of Elgin. HB 5912 would add a single sentence to the Illinois Vehicle Code:

Sec. 11-903.5. Bicycles. A driver of a vehicle upon a highway shall yield the right-of-way to any person operating a bicycle. 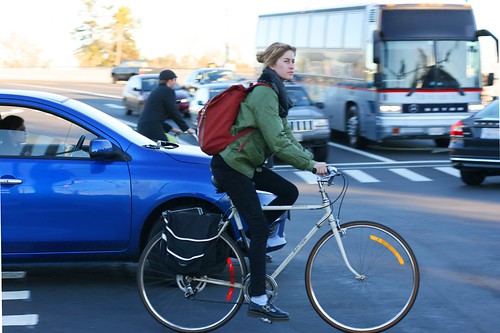 It’s an interesting bill and I love the implications, even if it’s short on implementation details. John in Chicago tells me this may be related to a case in which charges against a motorist who killed a cyclist were dropped due to legal technicalities.

@cyclelicious @stevevance I believe it was prompted by charge of failure to yield being dropped against a motorist who killed a cyclist.

HB 5912 was assigned just yesterday (March 23, 2016) to the House Transportation Committee for their consideration. Moeller, who was born in Berkeley, is a relative newbie to state office. She used to participate in local bike-to-work-day events when she served on the Elgin city council.

Republican Representative Donald Moffitt’s HB 4694 will require the Illinois DOT to comply with their own ADA transition plan during any construction, reconstruction, or resurfacing projects that may affect bicycle or pedestrian ways. The ADA Transition Plan outlines the state transportation agency’s plans to make Illinois transportation systems accessible to all. Apparently, IDOT have a have a habit of blocking sidewalks, curb ramps and bike lanes with road construction signs. This bill has been stuck in the Rules Committee since it was introduced on February 5.

SB 3282 introduced by Democrat Ira Silverstein of Chicago would define an electric skateboard and allow their use on and only on bike lanes. This bill is currently in the Senate Transportation Committee. Silverstein is one of the most powerful politicians in the Illinois Senate so this has a good chance of passage.