TL;DR summary: Despite claims to the contrary, the Santa Cruz Corridor Plan decreases automotive traffic impacts from development, helps improve tax revenue for infrastructure work, and indirectly discourages dispersed development in other, less regulated areas of Santa Cruz County outside of the city of Santa Cruz.

Over the past several months I’ve become acquainted with a planner who, until very recently, worked for one of the large Bay Area planning firms. Sitting next to her on the bus is like attending a graduate class on planning. I learned, for example, that the profession of urban planning emerged during the Victoria Era to mitigate the consequences of the Industrial Age by providing a healthier place for factory workers to live. They created a Utopian concept of “Garden Cities” to move workers away from filthy, polluted tenement housing. Our modern American ideal of a suburban detached home with a yard began as a social experiment by radical liberal idealists like Ebenezer Howard, who created the diagram below illustrating a “Central City” and surrounding Garden Cities all interconnected by railroads and canals.

These concepts depended on rail transport to move tens of thousands of workers from these outlying garden cities to the factory, but the ideas were adapted for the auto age and America. We see this separation of uses in Santa Clara County, California with residential zoning primarily in the south part of the county (and south of the Caltrain tracks), while jobs are concentrated towards the Bay in the northern portion of the county. Because single occupant SUVs can’t carry nearly the volume of people that trains do, asphalt for highways, expressways, interchanges, and monstrously huge parking lots broke Ebenezer Howard’s Utopia. This 1950s planning mindset results in horrific northbound traffic every weekday morning, hundreds of lane miles of stalled southbound traffic every evening, choking smog, increasing rates of asthma throughout the county, real estate lost to coastal erosion, and dead polar bears. One co-worker tells me her 12 mile commute takes an hour each evening.

While Santa Clara County is an economic powerhouse, neighboring Santa Cruz County is a bedroom community for the Bay Area. The economy is based primarily around agriculture, tourism, education, and (get this!) the bike industry. Logging, concrete production, quarrying, and organic chemical manufacturing for the “clean” high tech industry over the hill in Silicon Valley were big back in the day, but those industries have all but disappeared.

Large swaths of county land are public property owned by the state of California, which means no tax revenue. Much of the rest is either agriculture or low density residential. Low density residential in particular does not contribute enough in taxes to support the public infrastructure it requires. The result is crumbling roads, crumbling sidewalks, failing sewer lines, and a once useful regional bus system that will soon cut back to a lifeline only service even as our regional transportation agency promotes a $127 million commuter rail line to serve a population of barely a quarter million people. I’ve biked every road in the city of Santa Cruz and have seen first hand the ridiculous numbers of traffic generating cul de sacs and dead end streets we have here. 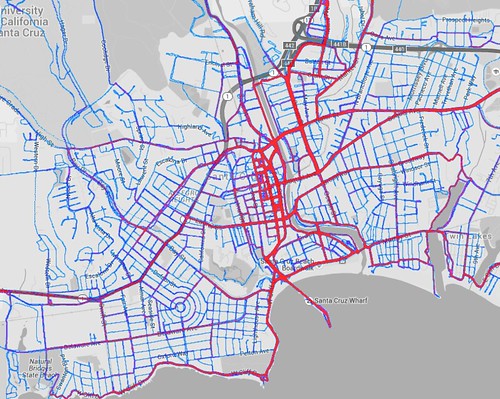 A new “Corridor Plan” in Santa Cruz recognizes the new realities of tax income and climate change by encouraging higher density and infill development along high traffic corridors. The plan encourages mixed use development with two to four story buildings, and includes good things like integration with sidewalks and transit and parking reduction in order to discourage automotive trip generation.

When I find a NIMBY forum for the city of Santa Cruz, the very first thing I see is a quote from “an experienced land use planner with over 25 years of public service” who clearly has a legacy mindset that residential and commercial uses should be geographically separated. I laud the concern expressed by this planner and others at this forum about the exposure to pollutants by low-income residents, but they don’t seem to understand that dispersed, low-density residential uses increase pollutants and greenhouse gases.

That page expresses legitimate concerns. Water supply is more constrained than elsewhere in the state of California. Although mixed use development results in less automotive traffic than detached housing development, many people who move to Santa Cruz will likely work “over the hill” in the Bay Area, which generally means more traffic on Highway 17.

But growth is coming to California and to Santa Cruz. If my children and your children can’t find a place to live in the city of Santa Cruz, they’ll move further east and south in the county, which has fewer development restrictions. They’ll still use local water, and their automotive traffic impact will be higher since you’ve forced them to live 20 miles further away.

Kudos to the Santa Cruz City Council which last night voted in favor of the 1600 Soquel Project in spite of vocal opposition from the NIMBY groups. They city council are hearing the flak right now from those opposed to change, so please let them know you support the Corridor Plan. Santa Cruz council members are all at-large, so if you live in Santa Cruz, all of them represent you and your interests. But please send hater mail to the council for their decision if you hate children, enjoy the smell of rotting polar bear corpses, and believe the solution to California’s excess population is a wall paid for by Mexico.

As a postscript, let me mention that NIMBYism isn’t necessarily bad or evil. That NIMBY site I pointed to, The Branciforte Bulletin, is an amazing resource for everything development related in the city of Santa Cruz, and whoever runs that site seems to be doing an excellent job tracking and analyzing proposed developments in the Branciforte and Seabright neighborhoods While I disagree with their fundamentally conservative “get off my lawn” anti-change philosophy, I salute them for keeping an eye on both city government and on developers.