We lost two people this week who were riding their bicycles on El Camino Real in Santa Clara County, California. This is two more than we usually have in a month countywide.

END_OF_DOCUMENT_TOKEN_TO_BE_REPLACED 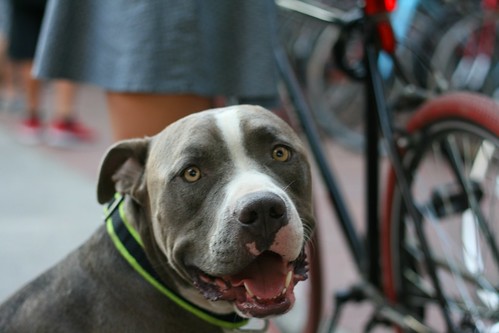 In 2009, Wolfgang Doerr was just riding along in New York City’s Central Park when he collided with a 45 pound dog. A couple of years later, Cheryl Dobinski crashed while avoiding a pair of German shepherds south of Buffalo, NY.

END_OF_DOCUMENT_TOKEN_TO_BE_REPLACED

Update: Sac Bee reports 38-year-old driver Alamar Houston will be charged with two counts of attempted murder, three counts of assault with a deadly weapon, and felony driving under the influence of drugs. Two 17-year-old cyclists were seriously injured, one of them critically. 51-year-old Donald Dumaine (whose story is recounted below) suffered road rash when Houston allegedly pushed him from the road. Full story (behind a paywall) at the Sacramento Bee.

Several news outlets reported yesterday’s police chase after a hit-and-run versus three cyclists that ended with a police dog takedown of the suspect in Sacramento, California, but there’s much more to this story.

END_OF_DOCUMENT_TOKEN_TO_BE_REPLACED

A quarter century ago, Celine Zilke and a friend were just riding along on a sunny day in Long Island when she was struck from behind by her classmate Darin and his Oldsmobile.

END_OF_DOCUMENT_TOKEN_TO_BE_REPLACED

Happy Monday. Bono of U2 appeared on the Tonight Show with Jimmy Fallon last week, where he discussed his infamously gnarly bicycle crash. Opinions may differ, but I think an arm bone poking through the jacket qualifies as “gnarly.”

END_OF_DOCUMENT_TOKEN_TO_BE_REPLACED

55 year old George Kaufer of Danville, CA was cycling to his dentist appointment when he was struck and fatally injured by a 1997 Toyota Avalon. According to the Contra Costa Times, the unnamed driver of the Toyota was traveling northound on Crow Canyon Road when she hit Kaufer at Crow Canyon and Tassajara Ranch Drive.

My heart-felt condolences to his family, who are understandably heartbroken over this loss. Kaufer, who leaves a wife and two daughters behind, was facilities manager for the San Mateo County school district and was known for using his bike to get around.

Posted In accident | Quick news
Manage Cookie Consent
To provide the best experiences, we use technologies like cookies to store and/or access device information. Consenting to these technologies will allow us to process data such as browsing behavior or unique IDs on this site. Not consenting or withdrawing consent, may adversely affect certain features and functions.
Manage options Manage services Manage vendors Read more about these purposes
View preferences
{title} {title} {title}