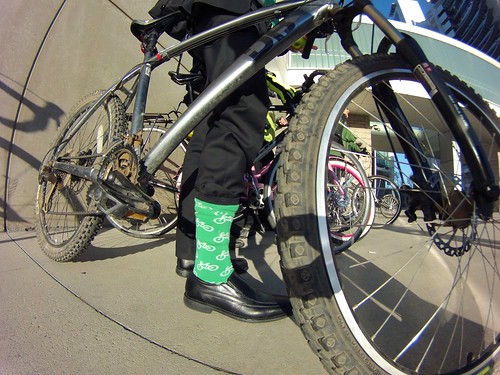 END_OF_DOCUMENT_TOKEN_TO_BE_REPLACED

Last week, Oakland Mayor Jean Quan was caught behaving badly when KRON newsman Stanley Roberts shamed her on television after a viewer sent a photo of Ms. Quan apparently reading email on her phone while driving.

END_OF_DOCUMENT_TOKEN_TO_BE_REPLACED

The eastern span of the San Francisco-Oakland Bay Bridge has been under construction since 2002 with opening of the roadway scheduled for Labor Day weekend 2013. The Chronicle reports hundreds of these one inch bolts may need to be replaced.

Crews that built the railing committed what experts called a basic mistake – they welded the bolts in place firmly in their slots rather than leaving a small amount of room to accommodate a natural expansion of the bicycle path that happens in hot weather.

As a result, scores of the 1-inch-diameter bolts have been sheared off along the 1.2-mile bike path on the southern side of the span’s skyway section. All of them, along with hundreds of others that were solidly welded, will have to be inspected and possibly replaced

Although the bike path bolts are considered a minor part of the bridge’s structure, some engineers believe this new failure of what should be a “straightforward, simple thing” raises serious questions about the state’s management of this $6.3 billion project. Last March, load bearing test on three-inch diameter rods used to secure the road deck to concrete columns resulted in the failure of a third of tested fasteners. This failure is attributed to faulty parts and will cost an estimated $10 million to fix.

The bike path was a late addition to the bridge design. The 15 1/2 foot wide path begins at the IKEA parking lot in Emeryville and swoops underneath the MacArthur Maze before connecting to the bridge as a floating structure at the edge of the bridge deck. The path only runs as far as Yerba Buena Island, and will not open for use until 2015 after the current eastern span with its infamous S-curve is demolished.

You can hear Scraper Bike’s latest track “On the Scene” at the Original Scraper Bikes blog. They say there’s a free MP3 download too, but that doesn’t work.

Next Saturday the Scraper Bike crew will be leading a “healin from killin, bike ride for peace” called Bike 4 Life in Oakland. If I hadn’t already paid to be in a conflicting event, I would be there for sure. Tyrone Stevenson and his cohorts are promoting riding and bicycle decorating as positive activities for the teens in his neighborhood. I had a chance to speak to Tyrone at Maker Faire this year and found him to be friendly and cheerful. He is a leader for cycling-enabled change in his tough community. MacArthur Fellowship nomination committee, consider Tyrone!

In the Chron today, an article by Christopher Heredia:

despite the car-oriented landscape, residents of the city’s Latino community, for the most part, liked to get around on foot and bicycle and, as a result, were bending the neighborhood to their collective will. . . . The bicycle was a key mode of transportation even though there weren’t dedicated bike lanes . . . . they like the cacophony of cars and bicycles because it reminds them of big-city life in China.

Posted In Culture | Oakland | transportation
Manage Cookie Consent
To provide the best experiences, we use technologies like cookies to store and/or access device information. Consenting to these technologies will allow us to process data such as browsing behavior or unique IDs on this site. Not consenting or withdrawing consent, may adversely affect certain features and functions.
Manage options Manage services Manage vendors Read more about these purposes
View preferences
{title} {title} {title}