The days are getting shorter and my son had to cycle to his Boy Scout meeting tonight so I bought him the Knog Bullfrog front light. This is my new favorite front light! 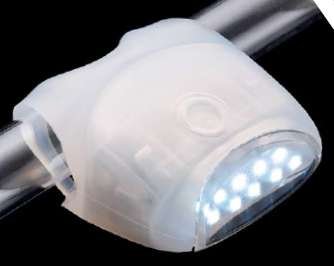 It’s very bright, attaches easily to any roundish protrusion, and has a very fast flash pattern that I like. I use rechargeable batteries and changing them is a bit of a pain — you need to slide the whole silicone cover off to get at the batteries — and I don’t know how waterproof this is yet, but so far I’m impressed.

This is a “be seen” light — it’s good for being seen on lit city streets. If you need to light the way to see the road, the Knog Bullfrog isn’t the right light for you. Otherwise, though, this thing looks cool and it stands out from the other lighting. Princeton Tec introduced the Swerve light at the Sea Otter Classic last weekend. My biggest grip about most bike lights is lack of flexibility in mounting them. Princeton Tec has solved that problem with the Swerve, which has the best mountain system of any light I’ve seen, with a clip, brackets and multiple bands allowing you to mount the Swerve to just about any surface on your bike, your bag or your helmet. Princeton Tec even wants your photos of your unique mounting technique at the Swerve Your Bike website.

With a pair of half watt LEDs (either flashing or persistent), the Swerve is brighter than the Planet Bike Superflash, which has a single half watt LED along with smaller flashing LEDs. According to Princeton Tec, one of the keys to the Swerve’s effectiveness and visibility is that the LED’s have different collimators (lens) – one is diffused, while the other is focused. This creates two different beams patterns that the viewing eye has to juggle. Enough light diffuses through the transparent red case to provide effective side lighting, also. The LEDs are bright enough to catch the eye even in daylight and through fog.

A nice usability feature is the large toggle switch, which is very easily accessible and easy to operate while on the go. You can even flip the lens around to move the toggle from left to right if you want. I started my ride home from Monterey last Friday evening in daylight, but as dusk approached I reached around my seatpost and my fingers quickly found the toggle switch.

My only gripe — and it’s fairly minor — is the relatively slow flash rate compared to most modern LED tail lights. I really like the super fast flash on the Planet Bike Superflash, for example.

I installed a set of the popular Danish Reelight SL100 electrodynamic battery-less bike lights on my bike and reviewed the lights at Commute By Bike.

Quick summary: I like them. Handy, no batteries to fuss with, they work as advertised. Raise your arm before a turn, and a tilt switch activates big amber LEDs to signal your turn at night. An accelerometer detects when you slow down to illuminate a big patch of red LEDs on your back. This clever cyclist jacket is the invention of Michael Chen in London, who won a design competition with this jacket. He hopes a manufacturer will pick up his idea in time to make the jacket available in time for Christmas for UK£100 (about US$200). This cyclist jacket is demonstrated in the video below.

Hat tip to Cycle Dog, who wonders how the wiring and electronics will hold up under constant use and wet weather riding.

Posted In light | safety
Manage Cookie Consent
To provide the best experiences, we use technologies like cookies to store and/or access device information. Consenting to these technologies will allow us to process data such as browsing behavior or unique IDs on this site. Not consenting or withdrawing consent, may adversely affect certain features and functions.
Manage options Manage services Manage vendors Read more about these purposes
View preferences
{title} {title} {title}